In 1934, Eddie Wigston founded a retail store in the town of New Norfolk situated on the Derwent River (a popular trout fishing district) 22 miles upstream from Hobart, the Capital of Tasmania.

As a keen marksman and an avid fisherman he operated the business known as E.L. Wigston selling radios, firearms and fishing equipment until he was joined by sons Ian and Garth. The Wigston family are keen anglers and during the 1960’s considerable time was spent experimenting with home made fishing lures. Over the convivial glass of beer at the local club one Friday evening during the late 70’s, the concept of mass production of lures was discussed at length by Eddie, Ian and Garth.

The Lure was to consist of a hollow weighted torpedo shaped central core surrounded with plastic including curved wings out each side. A wire loop with hook coupled was to be fitted through the core. Various patterns, colours and designs to be painted on the exterior. 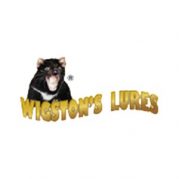